In Minion Fighters: Epic Monsters you'll confront many different attackers. You choose an avatar for the fight and immediately start battling in the dungeon's arena. Your avatar has a certain combat type and belongs to a faction.

Choose between these combat types:

Which combat type and which faction will you choose?

As a close combat fighter, your avatar is armed with swords, axes, and more. His stats are average in all areas. The long-range combat fighters are archers and mages, who can also attack from a distance. However, they do not have a strong defense and do little damage, but they are very fast. Tanks are very large and sluggish fighters. They are slow, but they do a lot of damage to the opponent and can also handle a lot of attacks well.

The faction of your avatar is also important for your battle strategy and defense. There are ghosts, orcs, beasts, demons, and elementals. You'll soon find out for yourself who is particularly efficient against whom in combat.

It’s all about the training!

In order to be well prepared for the Battle Dungeon, training is of course necessary. You'll improve your avatar's basic stats by doing so. Running speed, attack distance, and dodge chance, for example, are important characteristics that can help you win.

When you reach the next level with your avatar in Minion Fighters: Epic Monsters, his stats will improve. However, you'll make a really big progress by reaching the next evolution level. Then you'll have better attack options, more efficient armor, a larger life bar, or even a higher crit chance. However, training requires money - which you will earn in the arena!

Choose the right battle type and the optimal faction for your avatar to get the upper hand in the dungeon battle. Because victories pay off in Minion Fighters: Epic Monsters! You'll get rich loot and, above all, money that you can invest in new training sessions. This way you'll advance your avatar and jump to new challenges and epic conquests on the world map.

Stir up the Battle Dungeon with your fighting avatar - get the app Minion Fighters: Epic Monsters now! 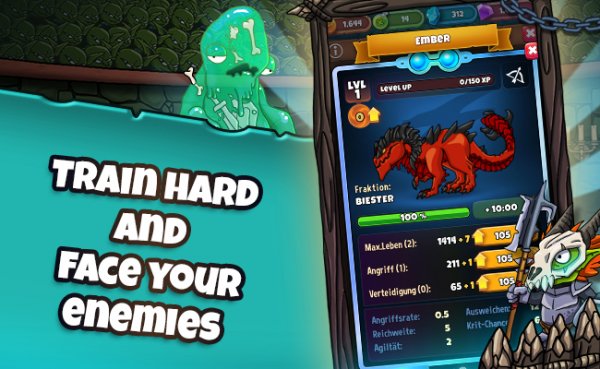