Asking for trouble? You’ve come to the right place in our pixel browser game Dark Gnome!

Lead a dwarven rebellion in our joyful upjers pixel browser game. The dwarves in Dark Gnome are short, but they’re mean. Once upon a time, they were the rulers of their totally pixelated fantasy world. It’s your task to lead them back to their former glory. Assemble a powerful dwarven team and conquer the neighboring lands in turn-based battles. The genre mix of turn tactics and role-playing elements has many more fun missions for you in stock. You’ll become the hero of Dark Gnome – the pixel browser game from upjers!
Play Browser Game 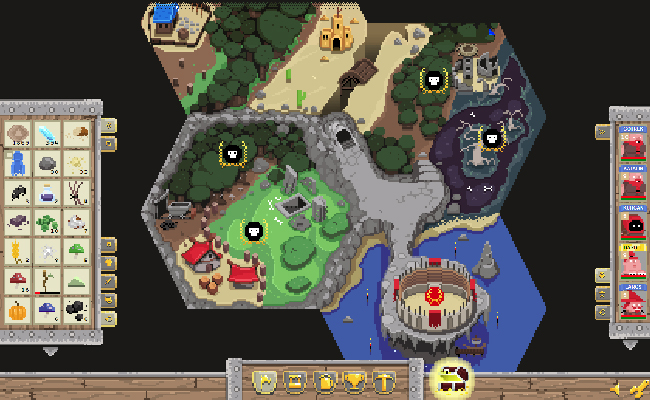 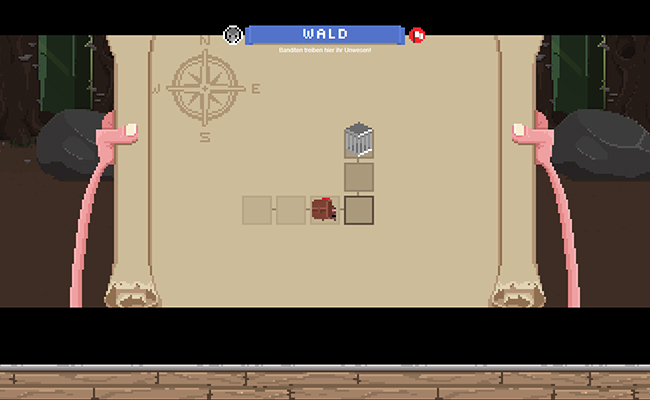 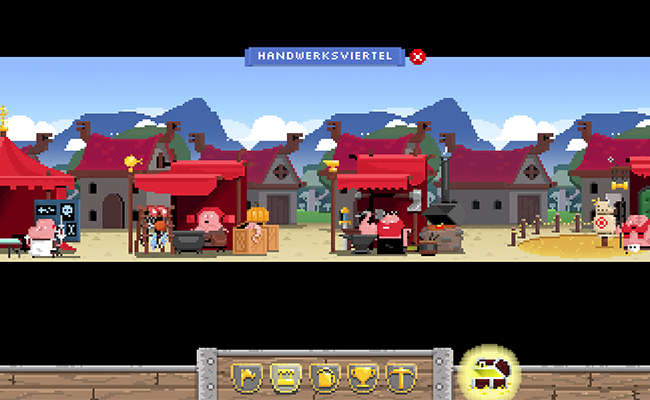 For centuries, the dwarven people were enslaved and oppressed in a remote valley. Fearful, weak and cut off from the outside world, they had to endure the rule of the cruel rats for generations. But now there’s a glimmer of hope. You! You have been chosen as the new ruler of the dwarven village. Prove that you inhibit the qualities of a true hero. Recruit dwarves for your combat troops and prepare to revolt against the disgusting rat king Charles. Experience the fantastic pixel browser game Dark Gnome. In a nostalgic 8-bit look, you embark on a special kind of pixelated odyssey. Complete rescue missions, free prisoners, collect valuable items and explore various game areas. Talk to Ida the cook who offers her food in the artisan district. Visit the tavern and replenish your strength with special potions. Whether it’s tree bark brew, root brew or root soda – here you’ll find the adequate refreshment for your hard-boiled fighters. Feast on memories of the battles you’ve fought in the past of leaf through the Tome of Heroic Deeds or take a look at the Bestiary to see what horrifying creatures you’ve already defeated. Dark Gnome offers you a grandiose fantasy setting with lots of hilarious characters, joyful ideas and action-packed, turn-based battles. Take injured dwarves to the village doctor who doubles as a butcher. Enhance the skills of your fighters and progressively prepare for the dwarves’ uprising. Play now for free!

He’s short, he wears a red hood obscuring his face and shows nothing but his eyes. Thungni is one of your fighters in the pixel browser game Dark Gnome. In this action-packed adventure game, you assemble your own dwarven combat troops. As the new ruler of the village, it is your goal to lead the proud dwarven people to glory and to power. For countless generations, the little warriors have been oppressed by the mean rats, but the time of the dwarven uprising has come. And you’re the mastermind! Complete riveting adventure missions. Fight against armored rats and even worse villains in turn-based battles. Expand your squad, take wounded dwarves to the village doctor and explore the area. Dark Gnome sends you on an adventurous and sometimes crazily funny journey through a fantastic world. Visually designed in the style of 8-bit game classics, Dark Gnome offers you an extraordinary adventure setting with thrilling challenges and tasks. Enhance the skills of your fighters. Meet quirky characters or rest in the tavern. Discover Dark Gnome. The pixel browser game offers you an extensive story with many funny ideas. Let yourself be surprised by the dangers lurking on your path to glory. You’re the dwarves’ only hope. Perform heroic deeds. Get on your way and lead the dwarven uprising against the rats.

What a jerk! In the pixel browser game Dark Gnome he’s your greatest adversary: creepy rat king Charles. Your goal is to defeat the ruler of the rats and finally free the dwarven people from their oppression. But the road there is long and adventurous. Experience the outstanding adventure RPG Dark Gnome. Explore a fantastic world in retro pixel look. Step by step, you build your own dwarven combat unit. Train the little warriors in a variety of martial arts and enhance their abilities. Because health, stamina and damage values determine victory or defeat. Dozens of monsters, enemies and sneaky boss opponents are waiting for you and your intrepid dwarves. But even the most hardened warriors won't be left unscathed. So that you don't get stomped into the ground by the next Rat Unit with a troop of handicapped people, you first bring your injured to bed - or more precisely to the village doctor's sickbed. He boasts that he can straighten out every bone. After all, he learned the butcher's trade, so he knows his way around blood and gore. How will that work out, you ask? Slip into the role of a hero and explore the riveting and entertaining pixel browser game Dark Gnome. Defeat the rat king and secure your place in the dwarves’ annals. Sign up for free and start your big adventure!